Title: Hanazakari
Pairing: Ohmiya, hints of Sakuraiba
Rating: PG-13 (ranges from G to NC-17 in the coming chapters)
Genre: Angst, Historical AU
Disclaimer: I do not own Arashi in any way
Summary: Ninomiya Kazunari was born into poverty with no value to his family name and was forced into prostitution until he met a certain man of nobility. A sequel to Hanami.
A/N: Unbeta-ed

He thrashed around wildly, expecting to loosen himself from the grip but to no vain. “Somebody…” Nino gasped for air as he reached his hand out “Help me…!” he felt weak and vulnerable, with almost zero will to fight back.
“Kane-san! Kane…san!” That familiar voice calling out to him, who was it?


Nino’s eyes suddenly bulged open, waking him up in cold sweats from the nightmare he had. His mind was still in a shock, reminiscing the terrifying feeling engulfing him a few seconds ago.

“Kane-san? Are you alright?” questioned a soft voice at his right. “It looked as if you were having a really bad dream” the owner of the voice stood up and came closer, revealing his familiar face. Nino thought he might be dreaming for the second time so he pinched himself—but he definitely was in reality. A shocking one too.

“Ohno…Sato--?” Nino tried to speak up but his voice came out all cracked. He terribly coughed from the pain in his throat, only to receive a glass of water from the other. “Don’t force yourself! You’re still in no condition to get up” A part of his memories returned the instance Ohno mentioned about his condition.

Only after that did the pain started seeping in and he felt his whole body going numb—especially his lower part. Truth to be told, Nino only remembered half of the incident and another half of it had somehow been erased from his memory. He remembered the part where Taijou tied him up and all…but what happened after that? He was tied, gagged too…and then?

His head hurts. His ass was badly aching too. Even his throat felt like it was being sliced into two— And only after putting the puzzles together did things came to his mind, one by one. The fact that his entrance was forcefully penetrated, the fact that his neck strangled plus his limbs tied and mouth gagged came crashing down onto him. Just remembering the bits felt horrible.

“You look pale. Are you okay?” Ohno suddenly scooted over to have a good look at him “Just tell me if anything’s wrong. I might be able to help you.” Concern was written all over his face as he said so, which somehow made Nino feel better and safer.

Why was Ohno there with him? No, was that even Ohno in the first place?

Nino just shook his head, stubborn enough to keep the thousand of questions to himself.

It was painful to talk but he could manage a few words after using the energy he had left to do so.  “Are you…Ohno Satoshi-sama?” Nino asked with his coarse, grouchy voice a few awkward minutes later.

“You know me?” The other put down the food he was preparing as he questioned instead. He looked surprised for a short second and Nino took that as a sign that Ohno was totally oblivious of him.

Amidst the confusion, Ohno looked happy for some reason. A smile painted on his tired face as he looked at Nino and began to speak. “It’s an honour that Kane-san knows me.”

“Call me Nino. Ninomiya Kazunari” Nino immediately cut him as the man managed his sentence. Honestly, Nino hated that name. It was his name as a slut and remembering where that name got him then caused a horrible feeling to swell in his stomach.

Ohno looked perplexed for a second before finally understanding what the other meant. “Nino? As in your real name? Can I really call you that?” his face shone like never before, inching closer to Nino gleefully. Nino on the other hand felt amused by his reactions, one like a kid’s and his anger subsided in an instance.

“To have my name called by a noble is an honour. Why would I not want that?”

Upon getting the permission granted, Ohno started smiling as he whispered the name to himself again and again.


Only when Nino whined in pain did the young master stopped his childish manner and began serving his purpose there. He called in the physician’s assistants for further treatment since the drugs were wearing off. Besides having the mark on his neck turning purplish and his hole injured, Nino also broke an arm which disabled him from doing things on his own. In other words, since Ohno was there, he was to be Nino’s arm for the time being.

“If it’s Aiba-san you’re concerned about then you’ve nothing to worry. The mizuage proceeded smoothly and Sho even seemed to be interested in that friend of yours” Hearing that was a big relief on Nino’s behalf. Nevermind what happens to him, Aiba was more of a concern than anything else.

It was already late at night but the both of them could no longer fall asleep, especially with all the topics they had to talk with each other. They had also began to have casual conversations about random topics and got along very well for a start. Nino had also been given the treatment needed and the pain had lessened, with Ohno’s help of course.

“I can’t thank you enough for saving me…but…why are you doing all this for me?” Nino asked out of the blue, feeling quite guilty to impose on Ohno’s kindness that way. The noble was neither obliged to stay nor take care of him so…why did he?

“Can’t I?” questioned Ohno with a hint of sarcasm but a sweet smile remain plastered on his face. “Just so you know I came to Hanami to visit Jun after 5 years of travelling all over Japan and I have nothing else better to do so I might as well do this, right?”

Nino slightly blushed—feeling bashful that a noble like Ohno was willing to spend his time with a mere courtesan such as himself. With his condition, it might even take quite some time to be discharged to top that. “How long will I be here?” Nino asked.

“Until you feel all better of course! And I won’t allow you to serve any customers in the nearest time since I’m the one paying your bills here” Despite being happy over the attention he was getting, Nino felt quite disappointed that Ohno misinterpret his question for wanting to go back to work.

After what he had been through Nino admitted that he was in no condition for work. He felt really traumatized by the incident that kept replaying in his mind like a broken tape. Ohno didn’t know how awfully grateful Nino was to have him there instead. It was because he did not want to face Jun—for the fact that the guy might give him a lecture all day long—neither did he want to confront Aiba, who’d probably  bawl his eyes out and that might rather trouble him.

“Thank you Ohno-sama. But just so you know, I won’t be able to pay you back until I’ve paid off all my debts to Hanami” As much as Nino wanted to savour the other’s kindness, he can’t help but feel more indebted instead. He had been living all his life in a condition where there’s a price for everything and the word ‘free’ simply didn’t exist in his dictionary.

Ohno might seem oblivious most of the time but he had been through a lot during his 5 years-long journey. And he simply understood what Nino meant by his words. “If so then how about this. As an exchange, please be my friend. And stop with the –sama thingy. Just Ohno is fine” was Ohno’s part of the deal—just to prove that his service didn’t come for free. “Just that?” Nino had a doubtful look on his face, wondering if the noble took him for a fool.

“It’s not ‘just that’. I don’t have any other friends than Jun, Sho and some of my old man’s acquaintances. And those old farts can’t even be categorized as friends!” At this, Nino chuckled in amusement for the first time that night. Seeing such an expression made Ohno smile wider. “See? You look cuter when you smile!” Ohno praised spontaneously and the other immediately turned beet red from embarrassment.

To not let the humiliation dwell on any further, Nino grabbed Ohno’s right hand and linked their pinky fingers together. “It’s a deal then. From now on, I'll be your friend. And I'll start by calling you Oh-chan"

A/N: I'm sorry this was done in quite a rush coz I'll be a bit busy a few days onwards so I thought it'd be better to post it asap~ I've also drawn the fanart of Ohchan as promised ^^" 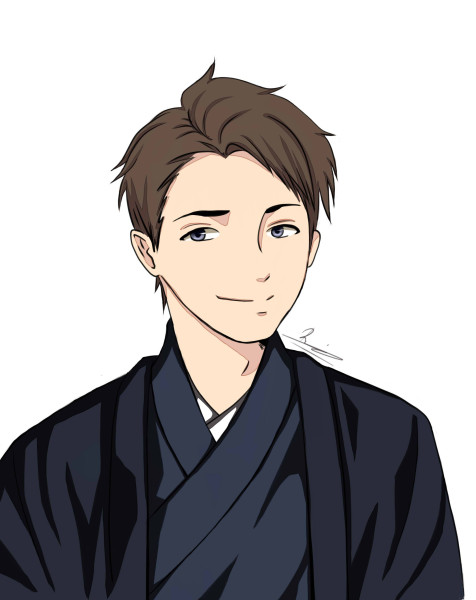 This is one of my laziest fanart probably xD I shaded using the simplest technique and with only a single layer each xD
My hand hurts A LOT after drawing something so simple... So please forgive me if this chapter turns out crappy ><
I've been overusing my arms these past few days but I'm going for physiotherapy again tomorrow :) The neechan is gonna beat the crap out on me lol...And if by any chance you see this fanart on facebook then that's definitly me ^^

I can't promise anything but I'll try my best to post the fics as fast as I can write~ Coz I'm gonna re-enter uni and start studying again by the end of this month and I'll probably be busier by then ><
Comments and feedbacks are appreciated :)
Tags: fic : hanazakari, length : chaptered, others : fanart, pairing : ohno / nino, pairing : sho / aiba, rating : pg-13
Subscribe